It might be difficult to imagine, but back in the heady days of 1964 when a popular beat combo from Liverpool was surfing the hysterical wave of Beatlemania, record executives thought it would be a good idea to make the band record two singles in German. Why? Well, to sell more records of course.

It might sound odd, but in the 1960s it was actually a common marketing practice for established British and American musicians to rerecord their most popular hits in a foreign language in order to win fans in hitherto untapped territories. Big Johnny Cash, for example, released a version of Walk the Line called Wer kennt den Weg (which contains the heart-wrenching couplet ‘Sie schenkte mir die Liebe und ihr Herz / Doch ich bracht’ ihr nur Tränen, Leid und Schmerz’). David Bowie did something a little different (obviously): to stop Italian covers of Space Oddity from beating his own English-language version in the charts, he commissioned Italian music lyricist Mogol to write entirely new lyrics to the tune. This resulted in Ragazzo solo, ragazza sola, a story about a couple that meet atop a mountain – not exactly Major Tom spiralling to his death somewhere in space.

Anyway, back to The Beatles. In January 1964, a reluctant John, Paul and George and Ringo were herded into EMI’s studio in Paris to sing the freshly translated/transcreated lyrics to their most popular tracks at the time, I Want to Hold Your Hand and She Loves You. Although they were taught the words phonetically, the fab four were no strangers to the language – after all, they started their career playing at dive bars all over Hamburg, and Paul McCartney was said to have quite a good accent. The lyrics were recorded in just one hour. In fact, the old German efficiency stereotype must have influenced them, because in the same session they also hammered out the rhythm track to Can’t Buy Me Love and rerecorded the instrumental track for She Loves You (which had been deleted by accident). A few weeks later, the stereo mixes of Komm, gib mir deine Hand and Sie liebt dich appeared in the charts in both West Germany and the United States, made a minimal impact, and sunk without trace until appearing on the Past Masters compilation in 1988. Meanwhile, the band vowed never to record their own songs in a foreign language again.

And that’s the story of Ze Beätles’ briefest of flirtations with the German music scene. At least they didn’t try to record any Schlager hits. 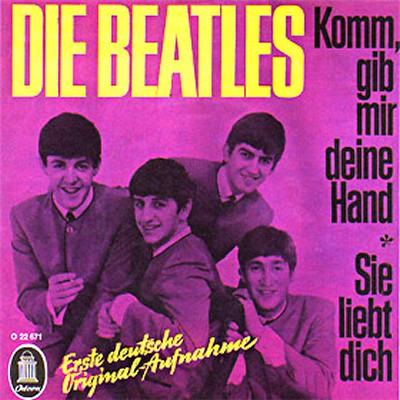