On February 1, 2006, Supertext went online with its copyediting service and became the first ever web-based copywriting agency. Ten years later, Supertext is now among the 100 biggest language service providers worldwide, with a network of more than 700 freelancers and 30 in-house employees in its Zurich, Lausanne and Berlin offices.

“Writing your success story” was the title of the press release sent to the media by founder and copywriter Rinaldo Dieziger on February 8, 2006. He described his Zurich West-based startup’s revolutionary copyediting service as follows: “First, the customer would upload a Word document with the draft text from their hard drive. They would then choose between the different copyediting options: ‘total rewrite’ meant a professional copywriter uses the content to create an entirely new text, and ‘fine tuning’ meant the text would be proofread for spelling, grammar and stylistic errors.”

From day one, Supertext was able to draw on a database of 170 professional writers thanks to its partnership with the Swiss Copywriters’ Association. Just one year later, Rinaldo Dieziger joined the Association’s board. “Of course, copywriting agencies were nothing new. We just made copywriting services more efficient, so that people could place their orders online – just like booking a hotel room or a flight,” says Dieziger.

To program the web platform, Dieziger called on school friend Rémy Blättler, who was working for UBS in New York after completing his Master’s in Computer Engineering. The business side of things was handled by his brother and co-founder Fabian Dieziger: “Even in a copywriting agency, numbers have to be crunched.” 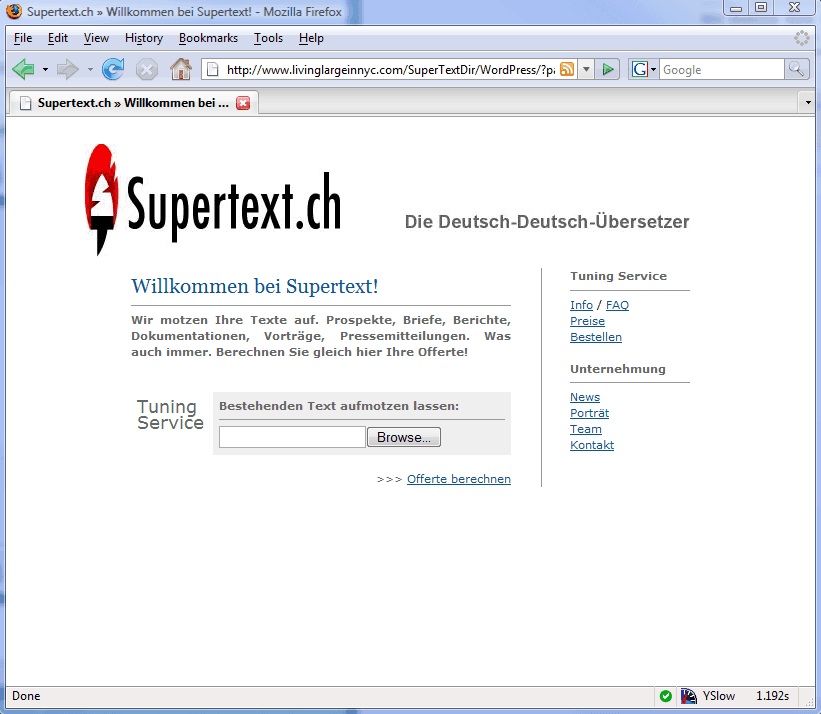 The first ever online copywriting agency looked like this in 2006: Supertext’s first prototype with a file upload and document analysis function.

“We received our first order on February 2, 2006, just one day after we’d gone online,” remembers Dieziger. “We immediately replied with an email to make it look like it was an automatic order confirmation!”

Two years later, Supertext’s web-based processing system secured it a place in the Red Herring Europe Top 100 list of technology startups, and won Dieziger a nomination for Entrepreneur of the Year. Right from the outset, Supertext relied on its own in-house developer team. Thanks to ongoing development across all its operations, Supertext now offers an all-in-one, internationally scalable, web-based system including an online price calculator, order placement portal, internal work flow processer, freelancer management tool, client portal, CRM solution, and accounting, invoicing and reporting tool. The ordering system has since been enhanced to work with plugins (WordPress, Drupal, etc.) and APIs. Today, more than 5,800 customers from 2,900 companies manage their orders on the platform, while 700 contracted copywriters, editors, translators and proofreaders track their projects.

From copywriting agency to translation company to language service provider

Rinaldo Dieziger looks back on the rapid development of the company’s services and client portfolio: “Our clients began asking for other languages pretty early on. In Switzerland it was mainly French, Italian and English. Today, we offer more than 30 languages.” The original copyediting service was overhauled in 2014 and transformed into separate services including copywriting, editing, revision, proofreading and translation.

“Although many people mistake us for a pure online service provider, we are in fact in close contact with our clients,” says Dieziger. Supertext has puts its linguistic stamp on the websites of established Swiss companies such as SWISS, Ovomaltine, Zweifel, Migros and Swissmilk.

And it’s certainly not pigeonholed into one industry, with clients ranging from ETH Zurich through to Coca-Cola, VZ VermögensZentrum to Ochsner Shoes, Sensirion and Hostpoint. Enrico von Walterskirchen, former copywriter, creative director and co-creator of the legendary MediaMarkt slogan “Ich bin doch nicht blöd”, has been Key Account Manager at Supertext since 2013: “Although our clients are different, they have one thing in common: they want super copywriters and translators.”

The internet has not only impacted the way Supertext works, it has also changed the type of orders it receives. Whereas 10 years ago, the primary demand was for letters, brochures, flyers and press releases, Supertext now writes and translates content for websites, blogs, social media, online shops, landing pages, newsletters and storyboards for YouTube films. Just as it did recently for its own 100-second company presentation.

Laura Fernández, Sales Manager, sees the demand for comprehensive services growing in future: “Despite having their own in-house translation team, some companies have still failed to develop a clear and consistent corporate language. One option would be to expand their in-house language department and incur the associated costs. The better option would be to outsource to an external, international language service provider such as Supertext. We work just like an in-house language department, handling the order from start to finish and focusing on our core competencies – translation and copywriting.” Supertext has already helped established companies such as Swisscom and Ringier in exactly this way, developing customized platforms that cater to their specific needs.

Andrea Clausen, the first ever Supertext employee, has headed up the first Supertext subsidiary in Berlin Kreuzberg since mid-2014. She looks back on a successful start: “Supertext’s German office makes us attractive to international clients such as Buzzfeed in New York.”

In fall 2015, Supertext set up an office in Lausanne with a team of French specialists, and other locations are already in the pipeline, although where exactly, Dieziger won’t yet say.