Why machine translation doesn’t mean the end of the industry.

Clients who don’t see why they should pay for your services when they could just run a text through Google Translate instead. Corporations who turn translators into post-editors, slashing their salaries in the process. Family members who insist on sending you articles about how technology is making translators obsolete. When it comes to machine translation, there’s plenty for translators to worry about. But amid the panic over an army of AIs coming to steal our jobs, the European Commission’s recent Translating Europe Forum offers a glimpse of a brighter future.

Academics and programmers at the annual forum unveiled a range of new technologies, from the everyday (the latest version of Trados) to the futuristic (neural machine translation, Google’s latest pet project). While there was a distinct undercurrent of alarm among the assembled translators, those presenting were usually at pains to emphasise the ways technology could work with rather than against them. 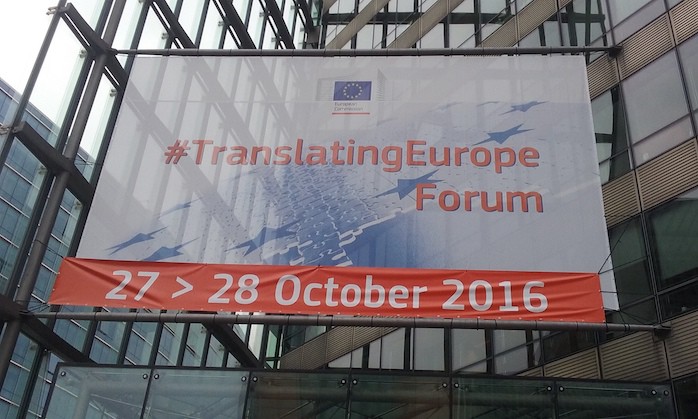 How to use machine translation – not whether.

Experiments to discover in what order translators consult different resources when working on a tricky text could eventually be used to create customised translation environments, suggested Amélie Josselin-Leray from the University of Toulouse. Keynote speaker Jost Zetzsche, meanwhile, enthused about the potential of machine translation at the sub-segment level, arguing that translators will increasingly use machine suggestions as inspiration for their own work rather than following them slavishly. He also highlighted the similarities between current fears of machine translation and concerns about CAT tools in the 1990s to reassure us that the future’s not nearly so bleak as the clickbait headlines would have us believe.

And whatever their other differences, almost all the speakers were in agreement on two things. Firstly, machine translation will eventually make the move from a per-word rate to an hourly rate inevitable. And secondly, transcreation involves a unique blend of skills well beyond even the most advanced computer’s capacities, so a knack for localisation and strong writing abilities are only going to become more important in future.

The machine translation debate aside, the Translating Europe Forum offered exciting insights into the power of combining translation with technology. Translators Without Borders chair Andrew Bredenkamp gave an inspiring keynote speech about the uses of social media to speed up translation during emergency situations. Twitter is a key tool for both building up teams of translators and for quickly creating and verifying multilingual glossaries. And technology doesn’t just allow aid workers to issue advice and warnings in local languages; it also enables them to allocate their resources more effectively by translating appeals for help posted on social media. If this is what the future of translation looks like, I for one welcome it.