Electronic Arts, one of the largest gaming companies in the world, naturally has players across the globe. But the reach of games such as FIFA, Madden NFL, Star Wars and The Sims go far beyond the player base – the soundtracks for these games launch careers of artists from all geographical regions and musical genres. For its upcoming titles, EA looked to Supertext for pitch perfect translations.

Soundtrack for the world

Steven Schnur, Worldwide Executive and President of Music for Electronic Arts, has been breaking through artists throughout his career. For EA, his mission is to create the ‘entertainment soundtrack for the world’, which means his lens has a truly global focus. Together with Cybele Pettus, Senior Music Supervisor, his music team at EA scouts musicians from genres as diverse as J-rap, Swedish Electro-Pop, Chilean and Brazilian hip-hop, and Australian EDM for tracks that will populate massively popular games that are localized in up to 20 languages and available in more than 50 countries. EA soundtracks have been incredibly successful in defining the global musical zeitgeist despite the huge challenges: the music has to be ahead of the trends by months, define the coming season for these games, and be suitable for listening by a diverse audience. One step in this process involves grasping the true meanings behind the lyrics through translations that capture the artist’s intentions.

Lyrical adaptation is a unique genre of translation and an area that Supertext has built a great deal of expertise in. Whether it’s subtitling music videos, where the track’s personality and lyrical timings are key, or adapting lyrics for recording – a musical and poetic endeavor as much as a linguistic challenge, Supertext’s transcreators relish in the opportunity to dissect and reassemble words with finesse and nuance. For EA, Supertext’s role is twofold: to flag words or phrases that may need careful attention for explicit content, and translate the lyrics as accurately as possible so that the true meaning of every word is captured. Often, ‘accurate’ translations mean one-to-one literal translations but in this case, it is the exact opposite – a word may have double or triple meanings, phrases may contain sexual innuendo, or there may be slang that only hyperlocals understand. The translations have to capture the entire spectrum of interpretation while staying true to the artist’s voice.

Working with Steve and Cybele on the highly-anticipated VOLTA FOOTBALL in FIFA 20, Supertext dissected lyrics of buzz tracks from not-yet-discovered artists from all corners of Latin America, getting into the nuances of the slang from Rio’s favelas to the flavors of Columbian and Puerto Rican Spanish. Supertext’s thorough analysis and translations of the lyrics meant that if anything needed to be flagged by EA before releasing the tracks, the intervention could be kept to a minimum to retain the integrity of the artist’s intentions as much as possible. 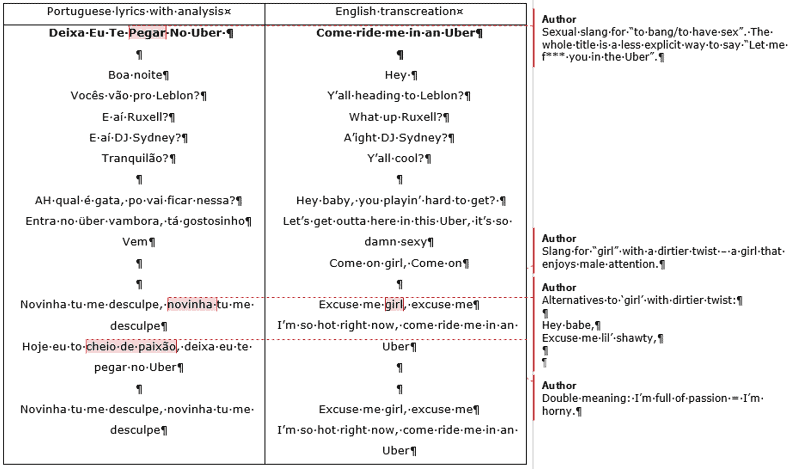 EA has enriched world culture by launching the international careers or artists as diverse as Bomba Estéreo, K’naan and Kings of Leon. Supertext looks forward to collaborating in changing the global music game.