Christmas is celebrated in 160 countries around the world – and each culture has its own unique traditions for the festive season. Find out what this means for your international marketing, and how to run successful campaigns in countries where there is less hype around Christmas.

Different country, different Christmas. Take the man with the bushy beard dressed in red and white – hop across the border and you may find him beardless or wearing board shorts. Different gift-bringers, different trees and different traditions make it impossible for a Christmas campaign to strike the same chord everywhere in the world.

Get familiar with these differences and by next year, you could have a Christmas campaign that scores points both at home and abroad. Here are some weird and wonderful Christmas traditions from around the world.

In Australia, Christmas falls in the middle of summer – which is why Christmas lunch often takes the form of a beachside barbecue rather than a cozy four-course dinner. Santa Claus has adapted to the weather, too, and often comes bearing his gifts on water skis, wearing red swim trunks. New Zealand is similar, and sees families gathering round the Pohutukawa, the Kiwi Christmas tree. The Pohutukawa grows near the beach and even produces its own decorations in the form of bright red flowers just in time for the Christmas season.

Sauna with the spirits

In Finland, children receive their gifts from Joulupukki, the “Christmas goat”. Over the centuries, the traditional goat has morphed into a human being, but goat ornaments are still hung on Christmas trees in many parts of Scandinavia as good luck charms. A somewhat more daunting Finnish Christmas Eve family tradition is that of visiting the sauna together and then rolling around in the snow. This must be done before sunset – otherwise you’ll be sharing the sauna with the souls of the dead who, according to folklore, follow the same tradition once the sun goes down.

Even Santa gets chilly

The Dutch figure of Sinterklaas doesn’t care for the cold – at least not all year round. Which is why, according to legend, he spends most of the year sunning himself in Spain. When Christmas comes around, he heads back to the Netherlands – not in a sleigh, but by steam boat via the English Channel.

A Kentucky Christmas to go

How do you run a Christmas ad campaign in a country that doesn’t celebrate Christmas? The Japanese will tell you that Christmas Eve is all about three letters: KFC. The fast-food chain conjured its own national tradition through a marketing campaign in 1974. Every year since, huge queues have formed outside its branches to order the Kurisumasu ni wa kentakkii! (“Kentucky for Christmas!”) menu. Why? For that authentic Western feeling – turkey is usually difficult to find in Japan. Since the 1970s, KFC has made its biggest turnover of the year at Christmas.

Old Father Christmas and the under-30s

According to the statistics, only around 2% of the Chinese population identify as Christian. However, that’s still around 30 million people – and they have their own special gift-giving figure named Dun Che Lao Ren (“Old Father Christmas”). On Christmas Eve, Chinese Christians give each other apples as a sign of peace. This is because the two words ping’anye (平安夜), meaning Christmas Eve or “Night of Peace”, and pingguo (苹果), meaning apple, sound similar in Mandarin. Traditionally, gifts are not given until Chinese New Year in February. However, Western customs have also been adopted by the non-Christian population – in particular the under-30s. The Christmas season is often used for shopping, as many retailers offer big Christmas discounts. Likewise, if you’re looking to reserve a table at a restaurant or a night in a hotel for Christmas Eve, you’d better book it in summer before they all fill up. 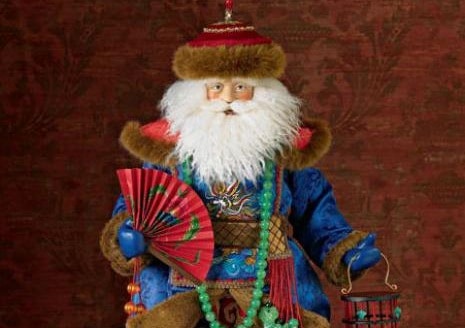 In the Philippines, celebrating Christmas is a serious business. On the predominantly Catholic islands, celebrations last for an impressive four months. Despite the heat, you’ll hear the first Christmas songs on the radio as early as September – and they won’t stop until January. Despite the many white sandy beaches, a White Christmas isn’t likely in the Philippines. In response, numerous amusement parks spring up with faux snowy landscapes for people to enjoy. A country that spends a third of its year celebrating love and family calls for some extra-special Christmas marketing. Denim brand Levi’s shows us how it’s done: its tear-jerking 2018 ad – specifically created for the Philippines – garnered 2.8 million views and over 145,000 Facebook mentions in just one month.

In Russia, according to Slavic mythology, Father Christmas – or “Djed Moros”, meaning “Father Frost” – comes on New Year’s Eve and freezes the whole country over with his magic wand. From that moment on, everyone waits expectantly for the first star to appear in the sky, which heralds the start of the Christmas celebrations. According to Orthodox tradition, these take place on January 7. This custom is also common in other Eastern European countries such as Latvia and Lithuania.

In Catalonia, the Christmas tree is nowhere to be found. Instead, families gather around a wooden log with a face painted on it, known as the Tió de Nadal. At first, it is treated to nightly gifts of food and a warm blanket. Then, on Christmas Eve, the children beat it with sticks until it relinquishes its gifts – or poops them out, a tradition that has earned it the nickname Caga Tió (“pooping log”). 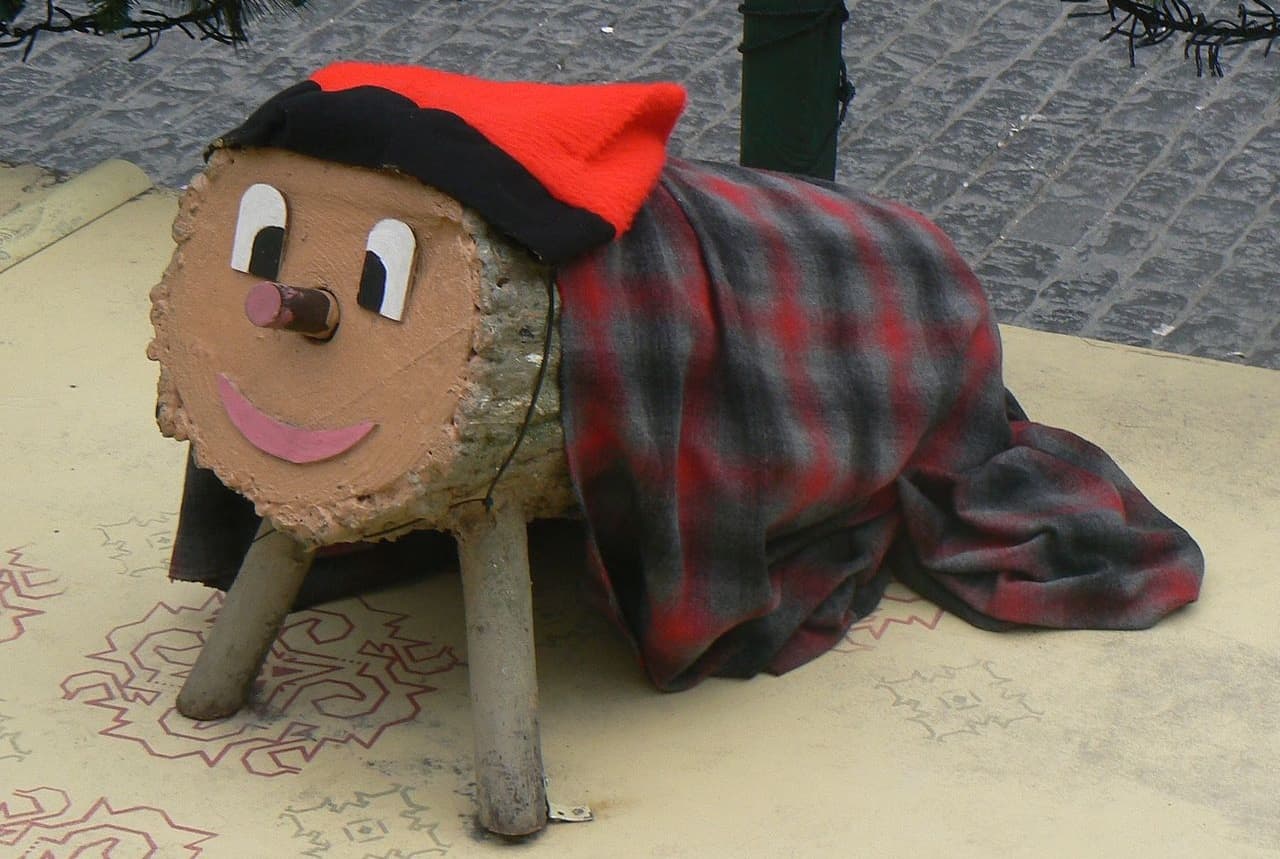 There are conflicting traditions in Italy: some say that presents are brought by the Christ Child (Gesù Bambino), others that they are brought by Father Christmas (Babbo Natale). Still others say it’s the traditional Befana, an ugly witch who comes on January 6 and either rewards children or punishes them. Who brings your gifts – and how long you have to wait – depends on your region.

If you thought the Bogeyman was creepy, wait until you meet Krampus. St. Nicholas’s counterpart in Austrian, Hungarian, Slovenian and Czech tradition is no jolly old soul: this terrifying figure goes around the night before St. Nicholas’ Day to punish naughty children. Things get even more sinister in Iceland, where the Jólakötturinn (a giant Christmas cat) eats lazy people whole on Christmas Day – “lazy” meaning anyone who doesn’t wear brand new clothes for the festivities! According to folklore, anyone who wears old clothes does so because they were too lazy to shear their sheep in time to make new ones. 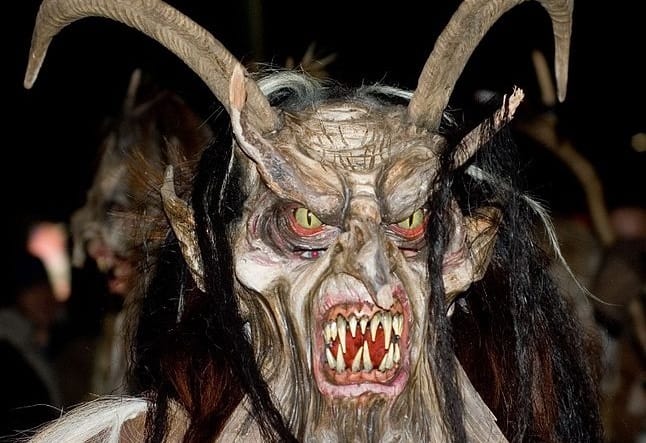 In Great Britain, on the day after Christmas – known as “Boxing Day” – it’s traditional to tip your local postal worker or delivery driver. This custom supposedly derives from the Middle Ages. Back then, wealthy landowners would give their servants the day off on December 26 as a thank-you for the previous day’s festivities, allowing them to celebrate with their families. In addition, they were given packages with gifts and leftovers from Christmas dinner. Christmas mail is a serious matter for the Brits, too. If you haven’t sent your Christmas cards by the first week of December, the pressure starts to mount. For those on the receiving end, it could mean a sad, empty string hanging in the living room – in the UK, it’s traditional to hang up a piece of string to display your Christmas cards for all to see.