This article appeared in German in the 19th edition of The Reporting Times (PDF) in October 2021.

Every company has a story. It starts with the founding, continues through the first shaky steps, and then comes to the flagship project. In corporate reporting, telling this story builds trust. But how do you tell it in a way that will captivate your audience? Business consultant Simon Sinek has a clear answer: start with “why”.

A brand story is compelling not because of what you’re selling, but because of why you’re selling it. The conviction at the core of your work is an end in itself. Sinek explains why some companies fail at storytelling using what he calls the “golden circle”. Many companies describe only the two outer rings of this circle – namely, “what” they are doing or selling and “how” they are doing so – rather than focusing on the “why” at the center. 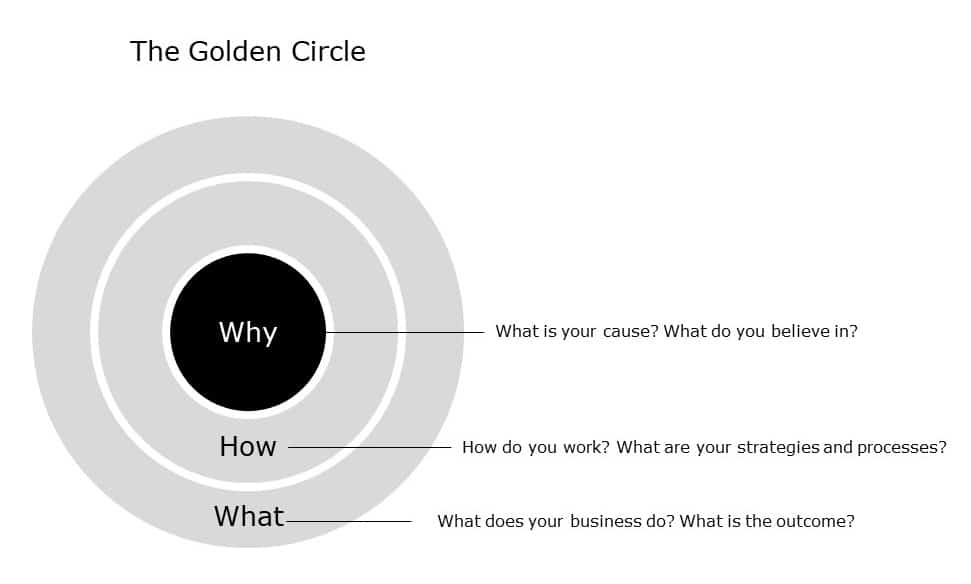 This model is easily explained by the human brain. The outermost layer, the cerebral cortex, controls our rational thoughts. This is where sales arguments and information – in short, the “what” – come into play. By contrast, the limbic system in the inner core of the brain regulates our emotions, such as trust and loyalty. These in turn are triggered by personal stories and visions – the “why”. This also makes it the place where habits are formed and decisions are made. In other words, if you’re sticking to the outer circles, you might be able to win people over with arguments. But it’s only the innermost circle that really moves people to act.

Finding your “why”: it’s often hidden in the solution to a problem.

It pays to make the “why” the foundation of your corporate storytelling – and the key argument of your next publication. But how do you find it? Start by asking yourself a couple of questions: what am I contributing to the world? What problem(s) am I solving? And how do I show that my product is the best solution for it? Most successful brand stories begin the same way: someone couldn’t find something, so they began to produce it themselves.

Once you’ve defined your story, you still have to make the whole thing sound compelling on paper. Apple provides a good example of how it works. From the very beginning, the tech company has presented itself as an innovator, focusing on the core of its brand: a belief in challenging the status quo and rethinking technology. It gained a fan base because people shared Apple’s convictions, felt its commitment and connected with it emotionally. The fact that the multi-billion-dollar company manufactures attractive, user-friendly computers and smartphones is almost an afterthought.

If you tell a consistent brand story across all your publications and repeat what drove you to choose your previous projects like a mantra, your company’s aims will stick in people’s minds – both your own and your stakeholders’.

And if you’re still looking for the right words for “why”, get in touch. Why? We have our own mission, too: to free the world from bad copy.