This article appeared in German in the 21st edition of The Reporting Times (PDF) in October 2022.

If you look at the 50 largest listed Swiss companies, it becomes clear that language diversity is decreasing. Half publish their annual reports in German and English, the other half only in English. Are translations no longer worthwhile? Or to put it another way, the costs are a drawback – but what are the perks?

Swiss law is clear on the matter: “Accounting is carried out in one of the national languages or in English.” It almost goes without saying that English is often the preferred language for the international capital market. Swiss GAAP FER and IFRS do not give any language recommendations at all. The choice for or against multiple languages is therefore up to the companies themselves. But how do they make that choice? After all, the time and effort spent should pay off. And generally, anyone interested could plug the report into a machine translation engine themselves. So why invest in translations?

First off, it is difficult to quantify the return on investment of a translation, as it is often just one of many tools for getting stakeholders on board. But a few facts about international shopping behavior speak for themselves.

Trust – a question of language

A study by the research institute CSA Research found that 90% of people are only able to fully engage with content in their native language. This makes it particularly difficult to create trust in foreign languages. At the same time, creating that trust is a key aim of your report. And, as every manager knows, a basic requirement when it comes to investments.

So in whom do you want to inspire trust? In general, the more international your stakeholders, the bigger the challenge. What’s more, your reports aren’t only read by English-savvy investors and analysts. The general public and your own employees – according to a study by the Vienna University of Economics and Business, a total of 25% of the readership of annual reports – also want to stay informed.

The CSA study also found that 40% of respondents never make a purchase without information in their mother tongue. Or applied to business: only companies that translate their publications can win foreign-language investors. After all, mother-tongue texts are most important in the consideration phase, when people are deciding which offer suits them. Translating the summary is one approach, but it doesn’t go into depth, especially since it’s not only facts and figures that promote trust, but also qualitative information and background information.

“People only buy what they understand. This also applies to share packages.”

In other words, acquisition in foreign languages is difficult. But so is maintaining shareholder loyalty. As long as the numbers add up, a foreign language might be enough. But if things don’t go so smoothly and you have to convince shareholders of your long-term strategy, language becomes all the more important.

So if you want to retain your stakeholders over the long term, you need to speak their language. Multilingual reporting can thus become an important tool in stakeholder management and can yield far more than higher project costs. Moreover, these are only a matter of approach. Talking to your language service provider often works wonders.

The question remains whether the machine can handle this as well. DeepL and the like are getting better and better. Delegating things to the public is certainly not reader-friendly. Using machine translation as a company would be an alternative. But it lacks style, creativity and emotion. In a nutshell, you don’t use it to build an identity. When it comes to fine-tuning language in reporting, you need human translators.

Reports that inspire not only shareholders, but also Aktionäre, des investisseurs and degli analisti? We’ll support you along the way. Systematically, quickly and convincingly. Even when it comes to costs. 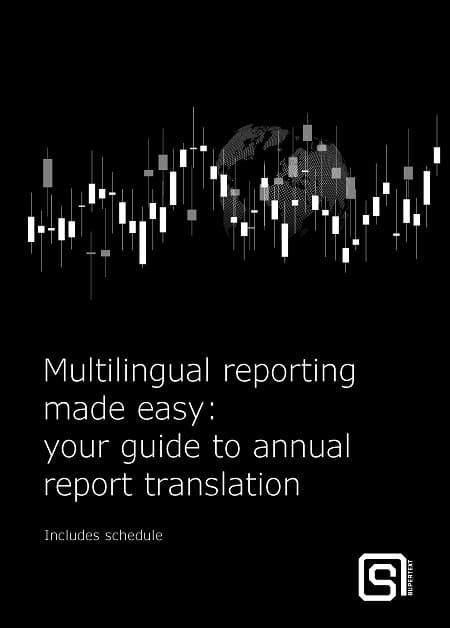 Translating the annual report: a systematic approach to success

Our step-by-step guide to multilingual reporting. Find out

– what is the optimal process

– who should be part of the team