What can you do with it?

YAML stands for “Ain’t Markup Language” and is a human-readable data serialization standard. It is mostly used for configuration files, but can also be used as data-interchange format for the storage and exchange of any data. It is similar to the JSON format, but provides additional features that JSON lacks.

More information about this format can be found on Wikipedia, on the official website, or on many other websites.

A YAML document can be represented as a tree.  The example above:

A path describes how to get to a node of the tree. We are only interested in paths that lead to scalars (represented as leaves in the tree) with content that contains text.

Example path that leads to the scalar with content “The YAML example”: header.title

You’ll be able to use YAML files in your Trados projects once the plugin is installed. By default, the parser will extract all texts and no setting changes are required. 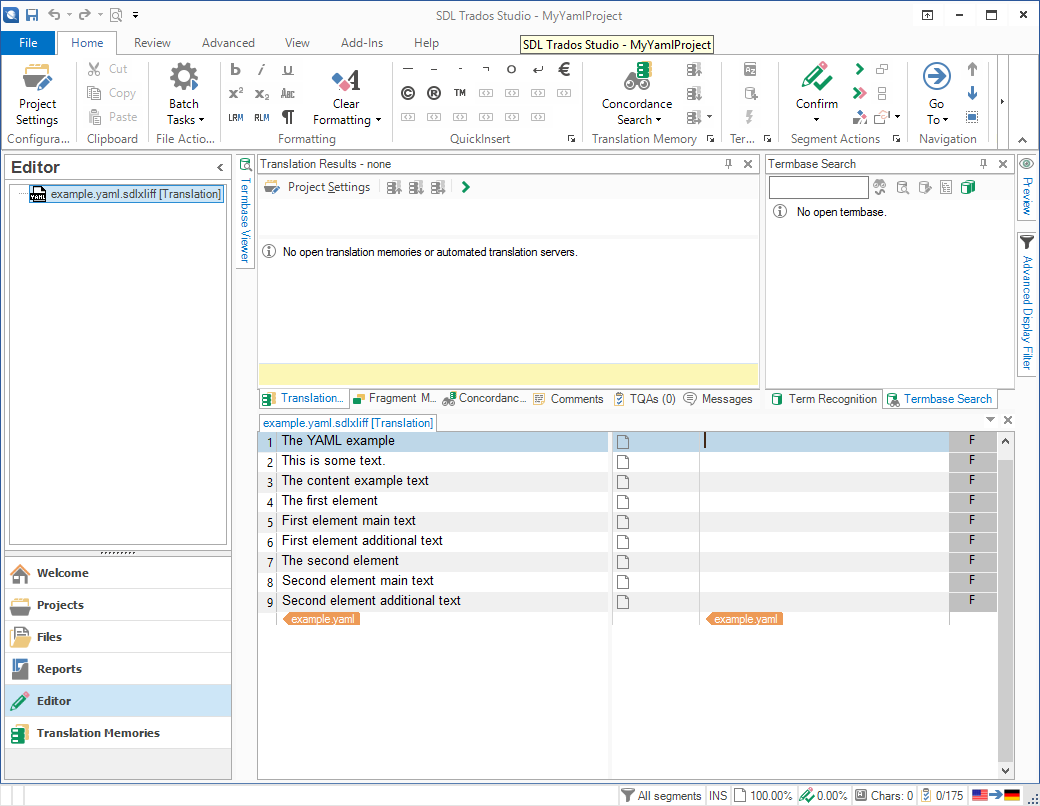 Use a path filter

You can either add filter rules yourself or extract all existing rules from a YAML file and then remove the rules matching the unwanted texts.

Example settings to get the header title and all “additionalText” properties of the above YAML document:

It is possible to use only “title” instead of “header\.title” and “content\.title” if both title properties should be translated, since the parser checks if the path contains the described pattern.

It is possible to specify a target path expression if the YAML document to translate is bilingual.

In this case you need to mark the rule as bilingual and define the target path expression. 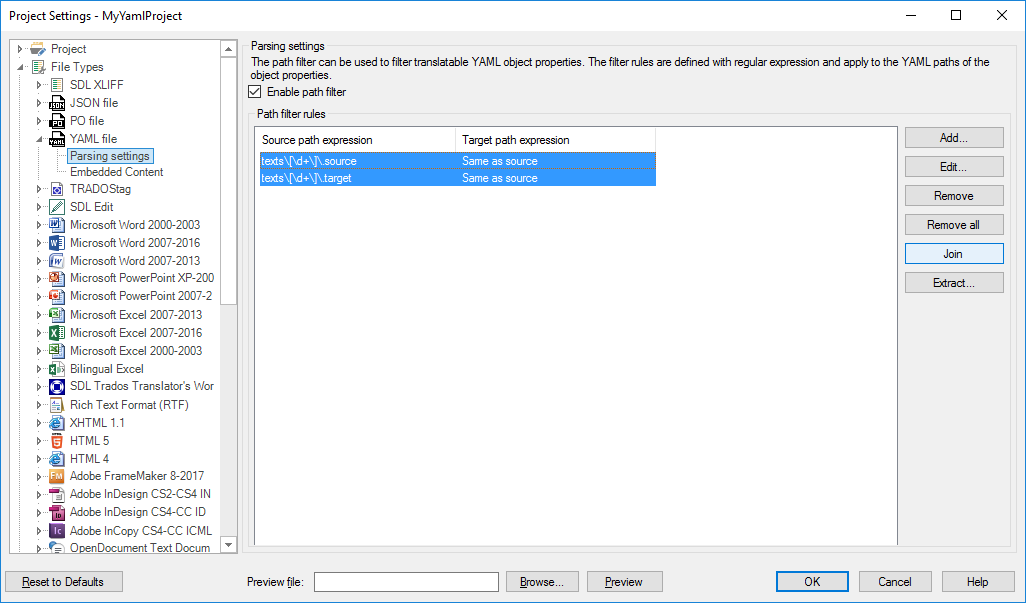 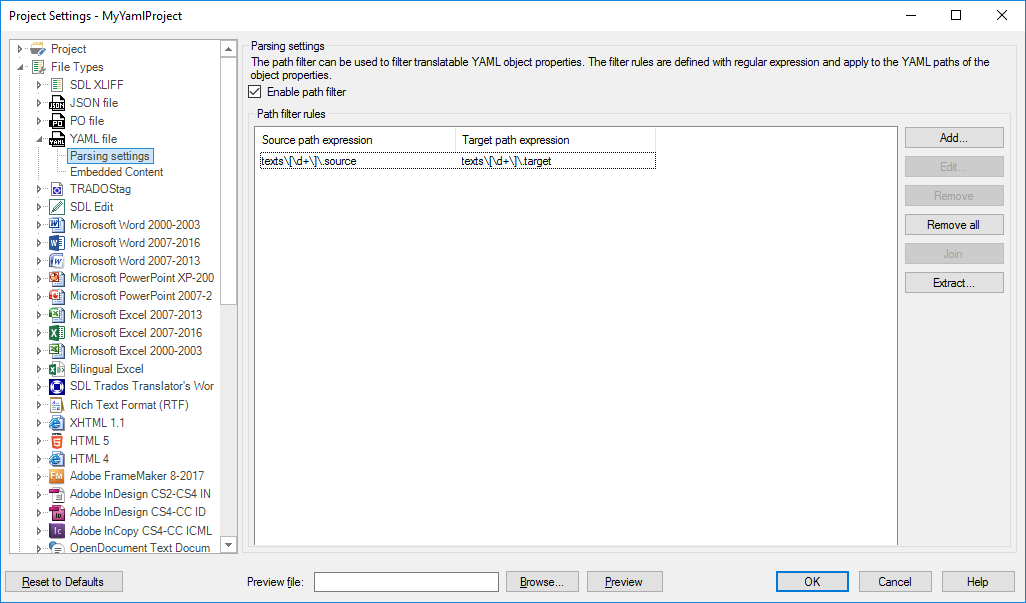 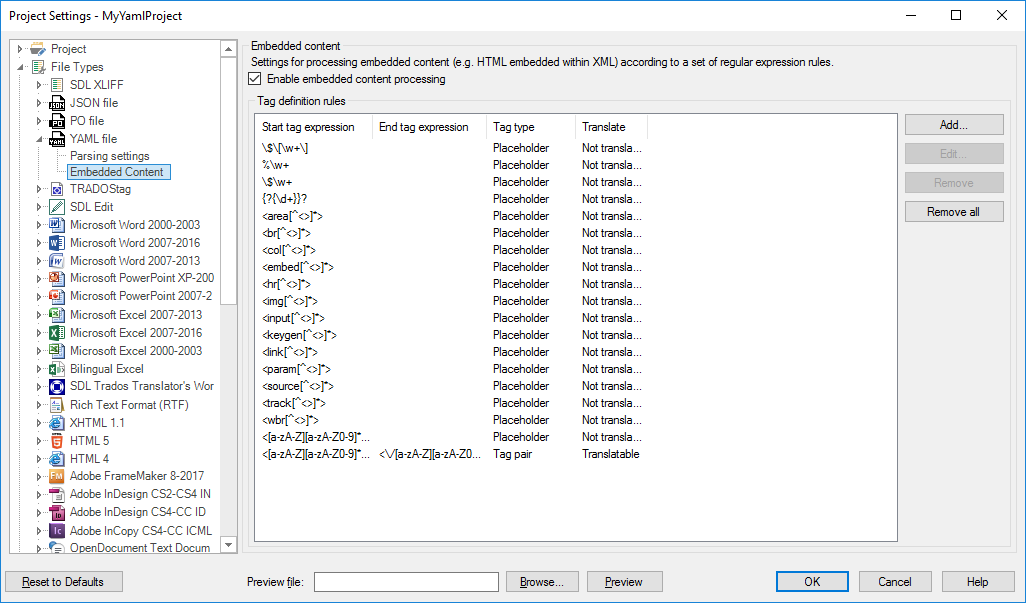 In the filetype preview you see the source text in both columns?
This is unfortunately normal. Just ignore this. Once you use the filetype for real, the source will only show up in the source column.

Please write your question in the SDL Forum first:
https://community.sdl.com/developers-more/developers/language-developers/
Drop us a mail too with a link to the post, we don’t always monitor the group: development AT supertext DOT com.
Make sure you include the yaml and the sdlfiletype settings file.

We are giving this plugin away for free and we will try to help you nevertheless. But we do have other issues to work on sometimes.